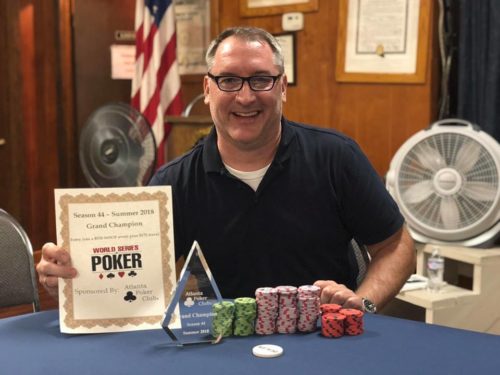 Congratulations Tal Isbell! Out of the 359 players that qualified, 167 came to play! The APC $1,715 Grand Championship was held on Sunday, July 15, 2017 at the American Legion in Duluth.

and the Grand Champion – TAL ISBELL!

How long have you played with the APC?
My first event with APC was in January, 2015. I had played bar poker nearly 20 years ago at Atkins Park, but it was more bingo than poker and not terribly rewarding to play. The more disciplined play in the APC encouraged by the season points structure and Venue Championships makes the game more reflective of multi-table tournament play.

How did it feel to win the Grand Championship?
It was a great experience. I'm primarily a PLO player, so it took a little bit of an adjustment to my playing style to align with the NLH game. The nine hour duration was the longest session I can recall playing so that took additional mental focus and endurance.

Have you played in WSOP and/or WPT events, and if so, what is your strategy that may differ from your play at the APC?
I had the opportunity to go up and play in two events in Cherokee last Fall. I made decent runs but did not cash either one - so my strategy may not be worth much but it was very similar to my play in the Grand. Pretty straight forward math based poker, taking advantage of late position to pick up a couple pots with betting rather than cards and the loosen up later in the tournament. My goal for this Fall is to make it to a cash so I can get an entry in the Hendon Mob database. Luckily at this Fall's circuit will allow me to play the PLO event where I will attempt to turn my entry won at the Grand into a great APC success story.

What is your advice for new players?
I would suggest that new players show up early, play the pre-game and don't be afraid to ask questions. A new player arriving after the game has started makes it difficult for the TD to have the time to fully explain the nuances of APC events.

What do you think of your APC experience as a whole?
My experience with APC has been very positive. As mentioned before, the points structure and Venue Championship encourages rational play by most players. With Gino's as my 'home' venue I really like the inclusion of multiple PLO games each week and the new H.O.R.S.E. game on Monday is a great change of pace. That being said, the APC is not just about one venue. The number of consolidated season end events including the Monthly, Grand, All Stars and Main Event encourages some outside variety for players like myself who largely play at one venue.