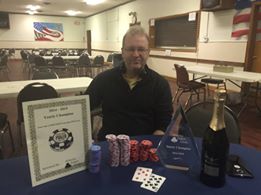 The APC Yearly Championship tournament is designed to award a $2750 WSOP Package, and it played at the conclusion of the Winter Season, which ended March 31st. The Yearly Tournament combined winners from across all three seasons of the APC year: Summer Season ’14, Fall Season ’14, and Winter Season ’15.

To qualify you needed to:

Tournament Event was 1:00 p.m. Saturday, April 25th, at the American Legion in Duluth.

97 players came out to compete! Camaraderie among the players added to the fun.

RICHARD DUNCAN, took it down! CONGRATULATIONS! RICHARD earned a place in the APC Hall of Fame.

Also, congratulations to all the qualifiers who played well for three full seasons and good luck for the next three seasons!

How long have you played Texas Hold'em?
The exact year of my initiation into the game escapes my memory. It was probably a year or two before my first experience with the APC, which was around 2008 or 2009. During that early period, I remember playing online and having a friendly chat with an Atlanta-based opponent who played with the APC and whose identity is unknown to me. During our chat, they suggested for me to play with the APC. It was many months later, but eventually I did act on that suggestion.

What have been your goals in the APC?
During my first few experiences at playing poker, I realized that, aside from my poor play, I lacked fundamental table skills, e.g., managing hole cards and chips, keeping up with the table action, etc. I began playing with the APC with a principle goal of developing this. With more confidence in place, the goal eventually evolved toward the development of a better understanding of the game. Also, a continuing and not so unimportant goal is to have a recreational outlet for something I enjoy: the APC does an excellent job of providing this!-

What is your philosophy of winning?
Watching other players and determining bad play has been a most important learning method for me. This is specifically the case for the many past examples of my own poor quality play. Like all knowledge, developing the reasoning needed to consistently resolve sound decisions is an inductive process. As such, failures always teach us more than do the successes.

Any advice for new players?
Talk with other players about the game. Experienced players are often willing to discuss their opinions about game situations. According to their skill and experience, opinions offered in this way will often be quite thoughtful while others will be unreasoned and foolish. Either way, you'll gain experience at understanding how your opponents think about the game.

Also, avoid taking hands personally, specially when they don't go your way. One of the surest ways to wreck your play is to regress into a posture of irrational play upon suffering a loss. The manner by which you attend a big loss or win often carries weight with the competing players: don't be a jackass either way.