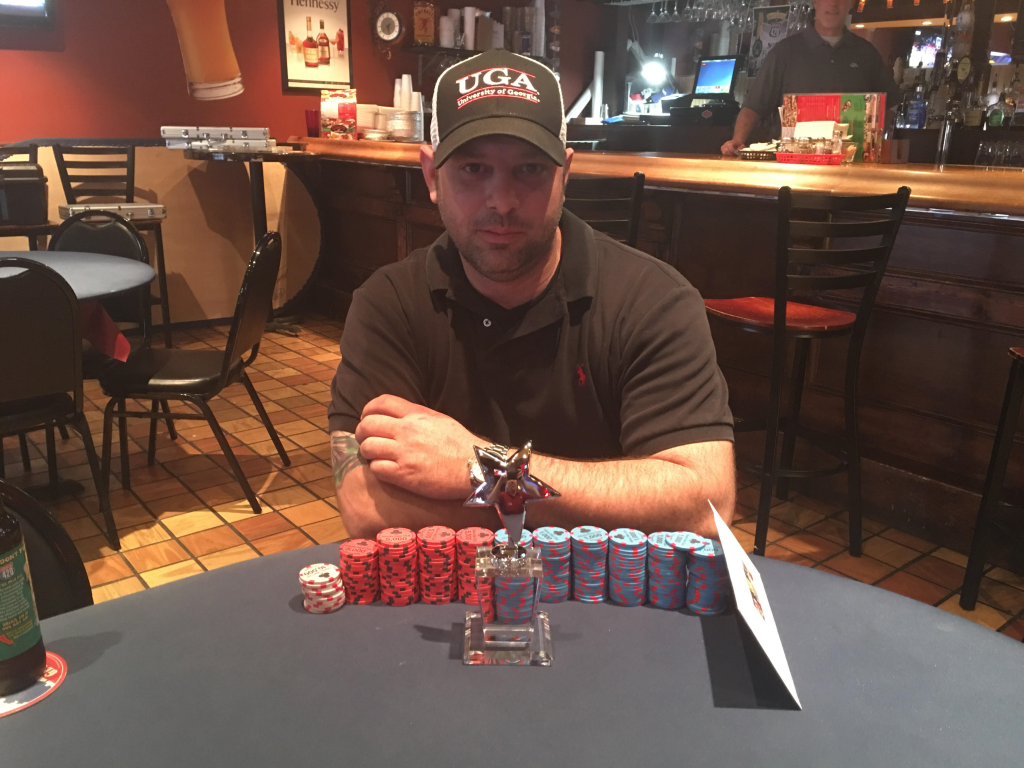 The Season 37 Winter 2016 $500 AllStars Tournament was held on Saturday, March 12 at Gino’s Blind Tiger in Atlanta. To qualify for the prestigious AllStars Tournament you needed to be 1st or 2nd in points at any qualified venue at the end of the season, Monday, February 29, 2016.

109 players qualified and 59 players made the trip to Atlanta. It was tough competition!

CONGRATULATIONS to JEREMIAH HARWELL and to all the AllStars!

How long have you played with the APC?
I've been a part of APC since summer 2006, starting as an employed dealer (there's a throwback) but really wasn't an active player until a little later that year. I won a VC coin my first full season at Dos Copas in Hamilton Mill and started making the "Gwinnett Tour" regularly. Then it was on to a great run as a TD for 8-9 years I guess it's been.

How much have you been playing lately?
My APC play has been very limited for a while now, but I can usually be found at the Monday night PLO game at Tavern on Main. My overall poker play mostly consists online at AmericasCardRoom, and the casinos when time permits.

Who is your favorite professional poker player?
Hard to really pick a person, because there is so much to learn from so many sources. I do closely follow the play of Dan "jungleman" Cates and Patrik Antonius, as well as the tournament play of WPT Player of the Year Darren Elias.

Now that you are the AllStars Champion, what are your other goals in the APC?
None really. I just enjoy playing when I can, socializing with friends, and at the same time, constantly studying the game.

Any advice to new players?
Don't get discouraged if you're having a bad run, and use every opportunity you have to study hands, to study situations, analyze and improve. That old adage is very true: "a minute to learn, a lifetime to master." Never stop learning something new.

How has your game changed over the years?
It's hard to say, but to me, my overall style hasn't changed very much. Aggression and position are the cornerstones of No Limit Hold'em, and I've always focused highly on those aspects. Our style of tournaments require constantly "changing gears," so I would say my evolution has been a lot more changes of strategy and style depending on situations. I'm sure a lot of people consider my play hyper-aggressive, but that really couldn't be farther from truth. There's ALWAYS a method to the madness.

How did it feel to win the prestigious AllStars Tournament?
Really awesome! In my 10+ years with APC, I think I've only qualified for All Stars once, for various reasons mostly attributed to light play volume. With the standard for AllStar qualifying now, I feel like you truly compete against the best every venue has to offer. I've won a few VC coins, but to win a major event is truly satisfying, and I think it validates my APC career a little more.

Do you play differently than an APC event when you are in a casino? If so, how?
I play every tournament differently, whether it be APC, casino, or major tour. I just can't stress how important it is to be able to adjust your play to the tournament structure and competition.

What do you think of your APC experience as a whole?
APC opened up a whole new world to me over 10 years ago. I fell in love with poker, and found myself taking it a lot more seriously over the years. APC opened that door to like minded people, whom you can learn from and share your knowledge with. Some of my closest friendships were built through APC and the game of poker. I can honestly say, making a phone call and showing up to deal an APC event was the best decision I've ever made for myself in life.