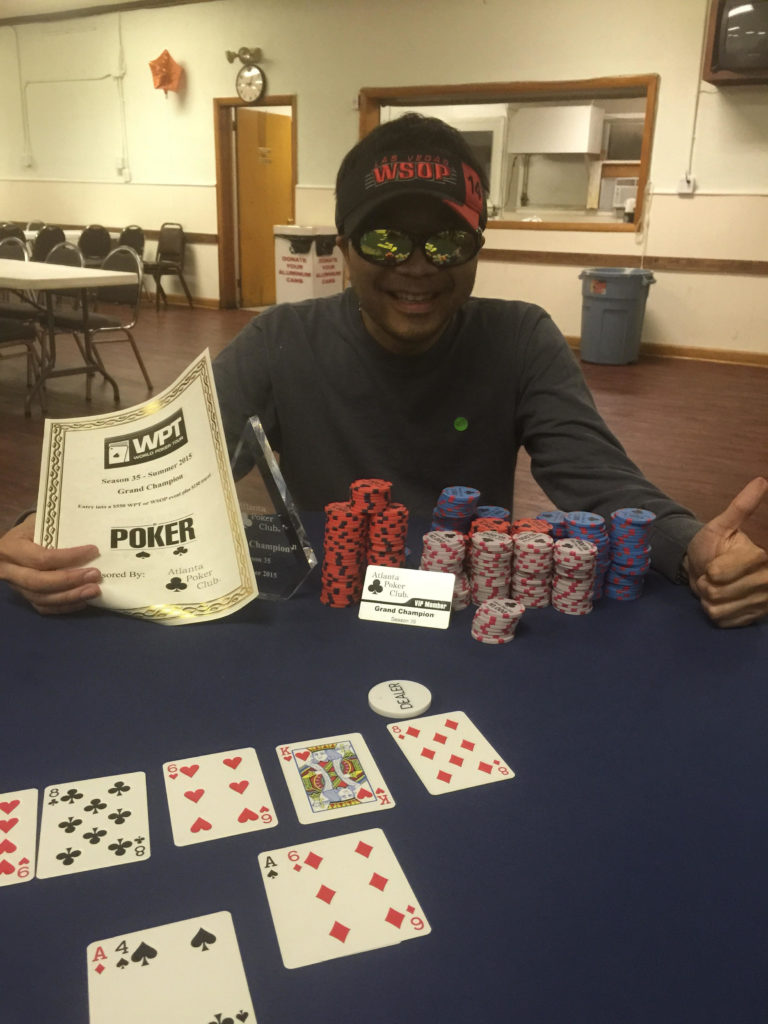 Congratulations Steve! Out of the 356 players that qualified, 155 came to play! The APC $999 Grand Championship was held on Saturday, August 22, 2015 at the American Legion in Duluth.

and the Grand Champion – STEVE QUACH!

CONGRATULATIONS to STEVE QUACH and to all the qualifiers!

How long have you played with the APC?
I started playing in February of 2011, the season Tommy Tran set the record for most points. I met him and Travis Hart at Southern Comfort and became good friends.

You were the APC Season Points Champion for Season 26: Summer 2012 and the APC Yearly Points Champion for 2011-2012. How did it feel to win the Grand Championship?
I feel a sense of relief and gratification. I came so close in these tournaments so many times. So to get over the hump is a great feeling.

What is your advice for new players?
I would recommend that they get a good poker book that has good recommendations for what good starting hands are in what positions, and download a poker calculator, and study every time they have a question in term of their equity against their opponents hand ranges. Then just play a lot and pay attention. After a while they would be able to put their opponents on hand ranges and take advantage of them.

What goals do you have left in the APC?
I don't feel I have anything left to prove but it would be extra special to win The Tournament of Champions or the $10,000 Main Event.

You have played in WSOP and/or WPT events, and what is your strategy that may differ from your play at the APC?
At WSOP and WPT events, players tend to be more aggressive. So I tend to three bet/four bet more often, and calling players down lighter. And lay traps in certain spots.

How did you place in those big casino events?
I cashed 3 out of 6 times in WSOP. All big tournaments with 800 players plus. I came close to a final table in Biloxi before my QQ got cracked by QJ. It brought back bad memory when I ran into the same thing midway to this Grand Championship Tournament. Luckily I was able to absorb it.