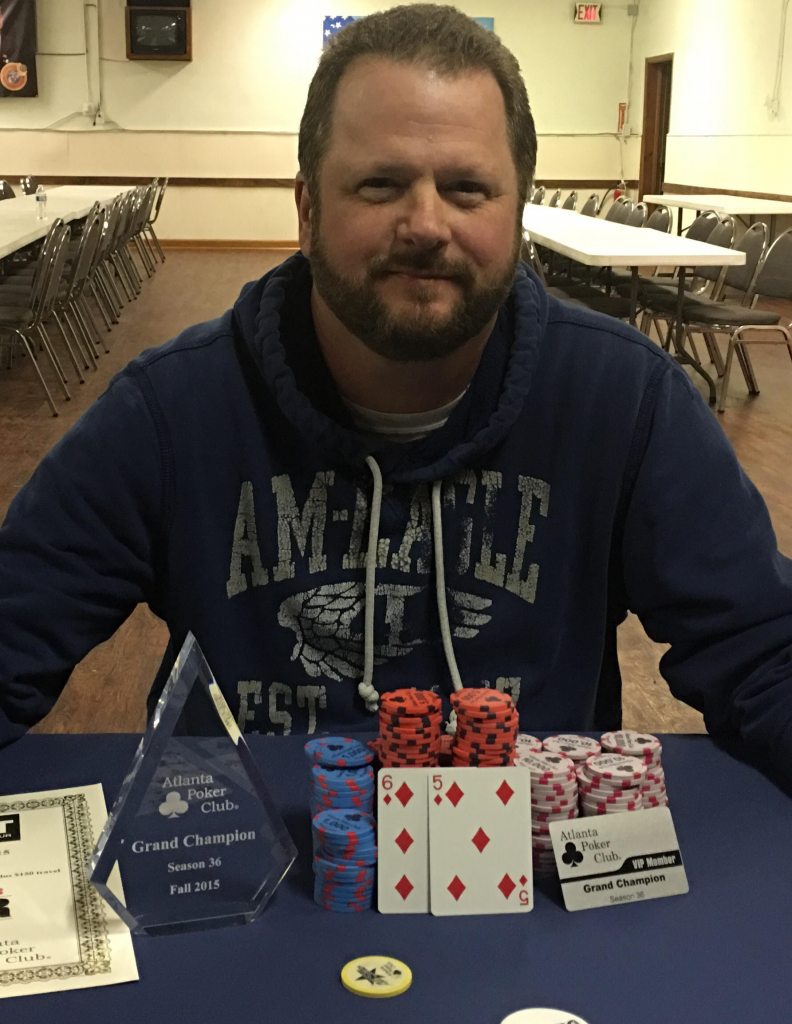 Congratulations Joel Gatlin! Out of the 386 players that qualified, 167 came to play! The APC $999 Grand Championship was held on Saturday, December 19, 2015 at the American Legion in Duluth.

and the Grand Champion – JOEL GATLIN!

How long have you played with the APC?
I started playing with the APC in the spring of last year, right before the APC $10,000 Main Event.

How did it feel to win the Grand Championship?
Winning the Grand Championship was an incredible and wonderful experience. Besides the honor of being invited to the tournament, it was great to be able to sit down and play with the best players in the league. It was definitely tough competition all the way to the final table. And that final table was a who's who of APC winners, making it a real mine field to get through. It just turned out that the cards were in my favor that day. I also want to give a big shout out and thank you to Spry, Erin and the WHOLE APC TD's and Crew for organizing these types of events for the players. The APC team puts on the best tournaments and has the best structure of any league in Atlanta!

Who has influenced your play the most?
My play has been influenced by many players over the years, but mostly by watching the pro's on TV, reading their strategy books and listening to not only how they play their hands, but WHY they play the way they do in certain situations. The primary influences for me have been Phil Hellmuth, Daniel Negreanu, and Doyle Brunson. I have met all three of them and have to say that they are all very nice in person, but deadly at the table.

Have you played in WSOP and/or WPT events, and if so, what is your strategy that may differ from your play at the APC?
Yes, I have played in many WPT and WSOP events and I go to Vegas every summer for the WSOP series. Even though the play in the APC and the WSOP/WPT vary due to buy-in amounts, number of players and skill level diversity, I personally try not to change the way I play, regardless if I am in a nightly tournament at Del Rio or at a WSOP event. My game strategy changes based on the players at my table, how they play, chip stacks, my position, their position, aggressiveness or tightness, and my overall reads on each person. To me, that is what makes this game so great and every tournament a different challenge.

How did you place if you played in those big casino events?
I have done fairly well in larger casino events over the past several years. I have 8 cashes in these events, 5 of which are in WSOP events. I have won several nightly and/daily events at Bellagio and Wynn casinos, but my best money finish was last June in the $250 Buy-in Seniors Event at the WSOP National Championship at Harrahs Cherokee Casino, where I finished 4th out of a field of 574 players.

What is your advice for new players?
My advice for new players is to study the game and watch as much poker on TV as you can (personally I like the WPT/WSOP events, because the commentary is so good and you can learn so much about how and why people make the plays they do.) Also, read up on the strategy books by people like Doyle Brunson, Daniel Negreanu, Phil Hellmuth and others. Finally, just talk to people who you think are better players, or who have had multiple wins, and ask them about your game and discuss hands, what they would do differently and really listen to what they say. Learning this game is the most fun of all, and getting advice from players who have had success in it is priceless.

What goals do you have left in the APC?
I continually push myself to be a better player day after day, month after month and year after year. My overall goal is to win the APC $10,000 Main Event, but I also have a long term goal of having at least 1 win in every major event type that APC has ($777 Monthly, $999 Grand Championship, $500 AllStars, $500 Dealers Tournament, Tournament Of Champions, etc.). I got close in the $10,000 Main Event last year and got 3rd, so I am hoping for a much better finish this year!