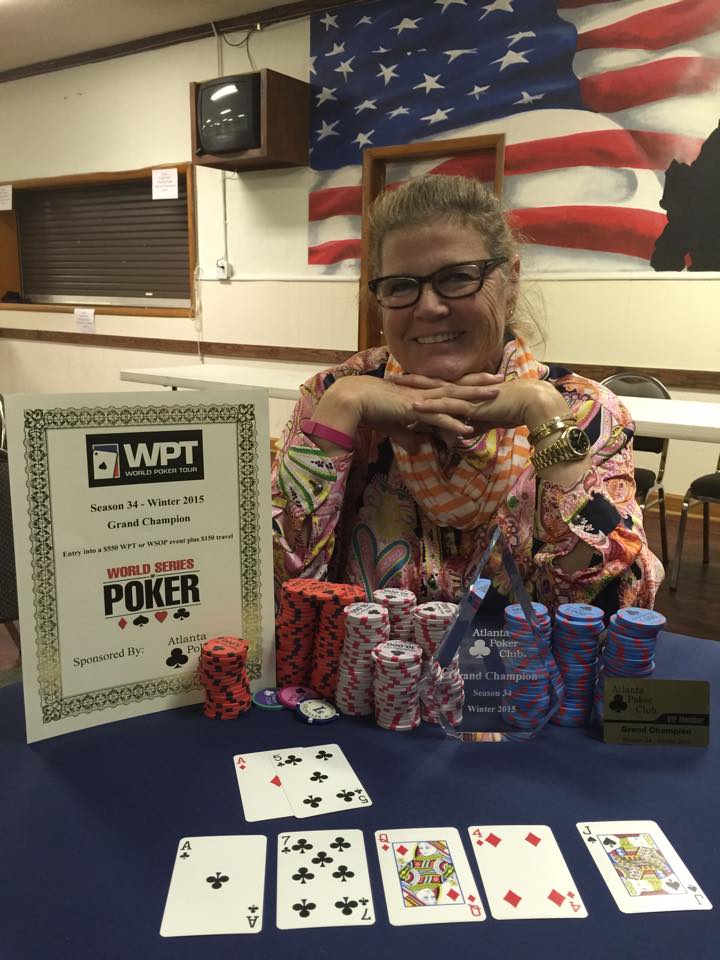 Congratulations Stephanie! Out of the 339 players that qualified, 160 came to play! The APC $999 Grand Championship was held on Saturday, April 18, 2015 at the American Legion in Duluth.

and the Grand Champion – STEPHANIE HUNTSINGER!

CONGRATULATIONS to STEPHANIE HUNTSINGER and to all the qualifiers!

How long have you played with the APC?
Two seasons.

How long have you been playing Texas Hold'em?
11 years.

How did it feel to win the Grand Championship?
Surprising, but very satisfying.

Who has influenced your play the most?
A guy at my table at a satellite I was playing at the World Series in 2012. He came up to me at a break and shared a tell of mine – really very gracious of him to say anything at all – and ever since, I think of him almost every hand I play. Interestingly, another APC player came up to me a couple months ago and shared the very same thing with me, so obviously, I don’t remember him every hand.

What is your advice for new players?
I don’t know if I’m one to give advice. What I will say is what I was thinking as I was playing the Grand Championship. I kept telling myself to play “my game” and I kept thinking I was going to win – something John Morris had shared with me about his win at Harrah’s in the PLO tournament earlier that week.

What are your goals in the APC?
I want to be a better poker player. Who doesn’t?

Have you ever played in a WSOP or WPT event?
Yes, I went to the World Series of Poker in 2007 and played in an NLHE event. I didn’t cash but I outlasted many of the pros that played that day and the highlight was having Chris “Jesus” Ferguson directly behind me until I was knocked out just before the dinner break. I’ve been to three WSOP circuits at Harrah’s Cherokee and that is where I first cashed in a tournament.