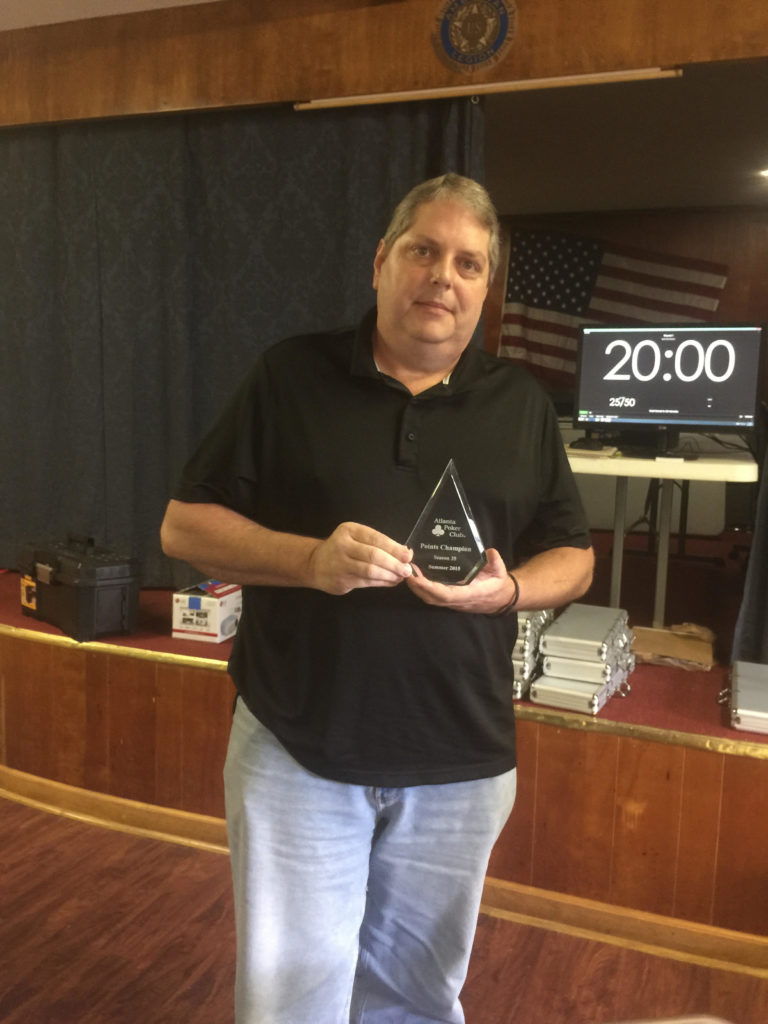 How long have you played Texas Hold'em?
My first tournament was September, 2012 with another club, I came in 3rd. I started with APC in February, 2013.

What is your secret to getting the most points in a season?
I played extremely tight, what I call "chicken s@%t poker." Others may choose to use "stack management." Not taking too many risks and knowing that you can get them next time when you have a better hand. To make it deep in the tournament.

How have you changed your game since you started playing?
Definitely my reads have gotten better, allowing me to bluff more, and win more hands.

Was your goal when you started the season to have the most points?
Not at all. I had just gone through a terrible season, 4 months with zero wins. This season started and I won a few games, then noticed I was in the top 5 overall. That's when it hit me, I could do this, so I started playing almost every day.

As you accumulated wins and amassed more points, was it easier or harder to win?
As more and more players realized I was the points leader, it became harder to win, plus Matt was right on my heels, and some wanted him to win, so they were gunning for me.

Who is your favorite pro?
Daniel Negreanu seems like such a nice guy and is my polar opposite, constantly talking, throwing people off their game. I would like to be able to do something like that.

Any advice for new players?
Pay attention to everything, always observe and learn.

What are the most important elements of playing at the APC for you?
I started with another league where chips were easy to come by and chasing was the norm. By having a max chip up, the chasers are usually eliminated early. Plus most of our dealers are remarkable, and the TDs are just as good.

What are your goals in the APC?
Still need to win at Del Rio. Always want to qualify for AllStars, the Grand Championship, and the Dealers Tournament, I need to win one of those. And of course learn, learn , learn.