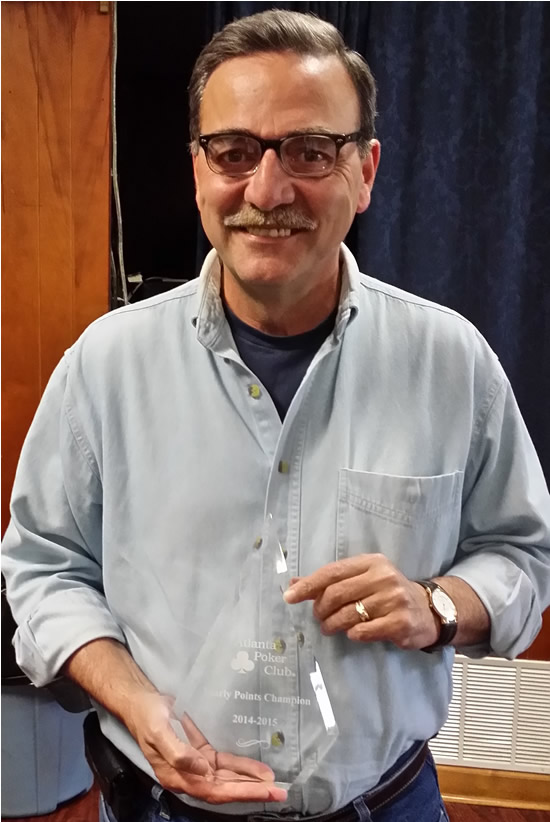 Where did you live before you came to Georgia?
I came from Italy with my family 8/3/1971, when I was a teenager. Several of my Aunts had married American soldiers after WWII and over the years my entire family immigrated to the United States. Most of us are in Georgia, with a few in Michigan and Minnesota.

Each Season lasts four months, and how does it feel to lead the entire League in points at the end of the third Season?
I have always been very competitive...in soccer and then in karate. Poker is my new competitive hobby and I always want to do my best. It's fun to be at the top of the leaderboard!

How did you start playing Texas Hold’em?
I used to play Bingo in Lawrenceville. I met Terri and Adam Cira at Bingo and they told me I should come and play poker at Southern Comfort. Our son, Chris, played poker in college and was always talking about the game. Sallie knew how to play Texas Hold'em, so I thought that would be something fun we could do together. I started playing little $1 tournaments online after Bingo to learn the game. When I won my first $1 tournament with 1,500 players, we decided to give Southern Comfort a try.

How long have you played with the APC?
I started playing with the APC in Season 13 which was in Spring 2008. We always have a great time and have made tons of terrific friends over the years.

What is your philosophy of winning?
My original philosophy was to play only strong hands in position, but I've added different strategies over the years. I have good instincts when it comes to putting other players on hands and have picked up some tells on APC players over the years. Of course, the secret to getting a lot of points is to play a lot and make final tables most of the time. I had 27 second places finishes last season that I wish had been first.

Who is your favorite pro?
My favorite pro player is Maria Ho. She is very smart and a great tournament player. We see her every year at the WSOP in Vegas and I try to snag a new picture with her every time.

Any advice for new players?
My advice to new players is to start with good starting cards in position and open up your game as you learn different strategies and the tendencies of the players at your venue. Every player is different and some venues certainly require a different style to go deep. Always be learning and adapting your game...nothing works every time against every opponent. I'm still trying to learn all of the math of the game.

What are the most important elements of playing at the Atlanta Poker Club for you?
The APC is a great poker club. Everyone can be competitive without spending a fortune or drinking a tray full of shots. The $10,000 Main Event tournament has been a wonderful addition to our club. It's a great feeling when you tell people to come and play with the APC because it's the best poker club and you know you're telling the truth. Jason Spry, Erin, the Tournament Directors, the dealers and all of the staff at the APC are doing a tremendous job providing metro Atlanta poker players an outlet for their poker fix.

Joe Avino has reached many milestones in the Atlanta Poker Club. He is number one on the Lifetime Leaderboard with 123577.30 points and 134 wins! Joe is the first player to reach 100 wins and the first member of the exclusive Century Club. He is the APC Yearly Points Champion 2009-2010 and the Winter 2015 Season Points Champion!