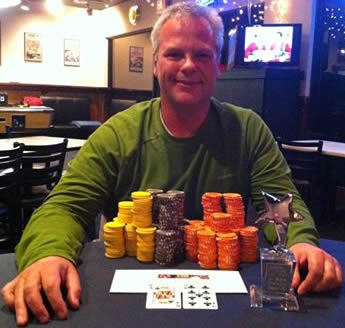 The Season 33 Fall 2014 $500 AllStars Tournament was held on Saturday, December 13 at Dillon’s Sports Bar in Lawrenceville. To qualify for the prestigious AllStars Tournament you needed to be 1st or 2nd in points at any qualified venue at the end of the season, Sunday, November 30th.

One-hundred players qualified and 70 players made the trip to Lawrenceville. It was tough competition!

CONGRATULATIONS to LADD GUNTER and to all the AllStars!

Ladd Gunter moved from Denver to Georgia in 1999, and has many interests besides poker that include cooking, golfing, and playing the piano.

How much have you been playing lately?
Too much! Really too much! Four or five times a week.

Who is your favorite poker player?
Antonio Esfandiari because of his commentary in the last two World Series Of Poker. Was impressed with the way he could call the hands.

What are your goals in the APC?
Lifelong friendships. At first it's about the poker. Then the friendships and the fact you become part of a family.

Advice for new players?
Don't worry about everybody else. Just play your game and you will learn.

Who has influenced your play most?
Travis Hart...a lot of years at SoCo and Sportsline.

How did it feel to win the prestigious AllStars Tournament?
First thought was finally. It felt great and the congratulations afterwards was amazing.

Have you played in casinos or in the WSOP or WPT?
Yes. Several trips to Cherokee for the World Series Of Poker circuit events. I have been to the WSOP in Las Vegas and left just before the big event. I did play in some ring events.

Is there anything you want to add?
The Atlanta Poker Club is truly like a family. Everybody gets to be part of that family after spending time with the APC.