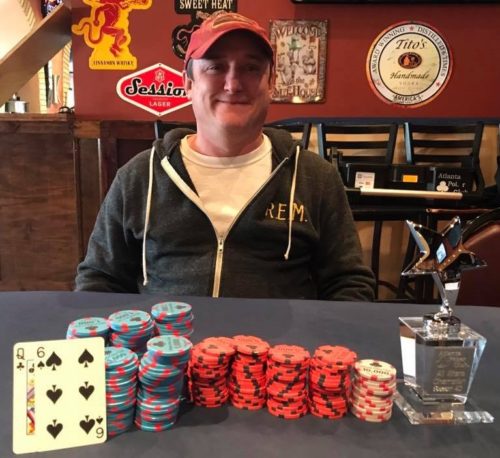 The Season 40 Winter 2017 $500 AllStars Tournament was held on Saturday, March 18 at Gino’s Blind Tiger in Atlanta. To qualify for the prestigious AllStars Tournament you needed to be 1st or 2nd in points at any qualified venue at the end of the season, Tuesday, February 28, 2017.

110 players qualified and 59 players made the trip to Atlanta. It was tough competition!

CONGRATULATIONS to PATRICK PIERCE and to all the AllStars!

How long have you played with the APC?
Regularly, for about 3 years now. The 4 years prior to that, I played a couple dozen times.

How many times a week do you play?
On average about 4 times a week (3 of which are PLO). Since discovering PLO a little over a year ago, Hold-em seems a little boring. I still love Hold-em, I just prefer PLO.

How did it feel to win the prestigious AllStars Tournament?
I would be lying if I said it didn't feel good or mean that much. With that being said, it could have ended any number of different ways. The blinds get so big that it certainly helps to have a little luck on your side at the right time. As a former Gino's bartender who plays almost exclusively at Gino's, I thought it was kind of neat that the final 3 (Mike Stewart & Blair Lewellyn) at the AllStars were Gino's players.

Now that you are the AllStars Champion, what are your other goals in the APC?
None, I am turning pro. Joking aside, of course I would like to win all the big tourneys. It would also be nice to win the Hold-em and PLO Venue Championships at Gino's.

How has your game changed over the years?
Up until a year and a half ago, my experience playing in APC was 50% social and 50% poker. Since then, it is more like 10% social and 90% poker. In addition, I believe learning to play PLO has made me a better all around poker player.

Do you play in casinos, and if so, do you play differently than in an APC event?
Not that often. When I do, I usually stick to the single table Sit & Go. My APC style of play translates pretty well to the Sit & Go.

Any advice to new players?
Be patient. It is not a sprint, it is a marathon. You can't win a tourney in the first few set of blinds, but you can certainly lose. You should fold way more hands than you play preflop. If you are questioning whether to call or fold, it probably means you should fold. I would rather make a bad fold, than a bad call. Always remain open minded to learn. And lastly, don't call preflop raises with Ace rag, even if they are "suited."

Who is your favorite professional poker player?
I haven't followed the professionals much in recent years, but I always liked Huck Seed. He is quiet, unassuming, and lets his play speak for itself.

What do you think of your APC experience as a whole?
It has been great. APC runs the best free poker in town. The venues do a great job, especially Gino's and Del Rio paying out real cash. Most importantly, I have met a lot of great people, some of whom I will be friends with for life and for that I will be forever grateful to APC.