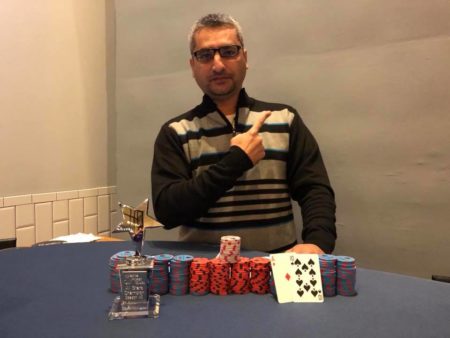 The Season 42 Fall 2017 $500 AllStars Tournament was held on Sunday, November 12th at Pauley’s Crepe Bar in Atlanta. To qualify for the prestigious AllStars Tournament you needed to be 1st or 2nd in points at any qualified venue at the end of the season, Tuesday, October 31, 2017.

96 players qualified and 62 players made the trip to Atlanta. It was tough competition!

CONGRATULATIONS to IMRAN RAZA and to all the AllStars!

How long have you played with the APC?
I have been playing this League for the last two and a half years. I played poker for the first time ever in late summer of 2015 and obviously it was with APC.
That day, I remember a few players advised me to start off with some free apps and learn before I play APC, but I couldn't wait to hit the live tables.

How many times a week do you play?
Initially, I was playing less but my love for the game began to grow even stronger every day and now I play three to four times a week.

How did it feel to win the prestigious AllStars Tournament?
This is my biggest win so far and it was my first time to qualify for this prestigious event. It feels great and this has also been a great learning curve at the same time. Unlike the Grand event, only top two players from each APC venue can qualify so it really speaks for itself. At the beginning of the last season, I set my target to qualify for AllStars and I did it.

Now that you are the AllStars Champion, what are your other goals in the APC?
After my first win, I set my goals to try to play all $777 Monthlies, Venue Championships and Grand Championships and this season I made it to the AllStars event. For the past four to five seasons, I have been qualifying for these events on a regular basis. Within APC, my goal is to continue what I am doing and use this platform to improve my skills and be more competitive as a complete poker player.

Has your game changed since you started playing?
BIG TIME YES! Especially over the past one year, I focused on continuous improvement and I am happy with my progress. I learned and added a lot of aggression to my tight play strategy. I do make mistakes, however at the same time, I am a big critic of myself so I always think I can do better and not repeat the same mistake.

Do you play in casinos, and if so, do you play differently than in an APC event?
No! I have yet to try my luck in a casino, but over the last six months, I am seriously starting to think of raising the bar and dig a little deeper now.

Any advice to new players?
Well, this is a tricky one as I have only been in this game for a few years only, but I would definitely suggest to any new player that if you are playing in the Atlanta area, don't try any other leagues and only play the best - which is APC.

Who is your favorite professional poker player?
I always admire Antonio Esfandiari but these days I am also watching Fedor Holz as well.

What do you think of your APC experience as a whole?
Simply great. I have been in USA for a little over 5 years and I have made so many good friends playing poker with APC. I was warmly welcomed everywhere I went to play APC. I like the diversity and acceptance level of this league.