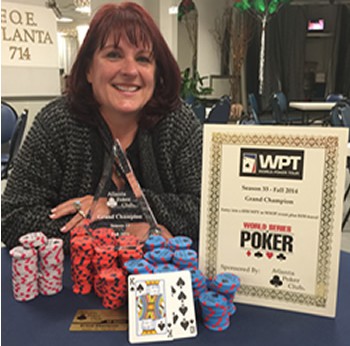 The Atlanta Poker Club $999 Grand Championship was held on Saturday, December 20th at the The Fraternal Order of Eagles in Doraville. There were 325 players qualified for the tournament that is the highlight of an entire APC season.

ANGELA PAVLICHEK emerged victorious and beat a field of 180 players!

How long have you played with the APC?
Five years.

How long have you been playing Texas Hold'em?
Eight years.

How did it feel to win the Grand Championship?
Surprising.

Who has influenced your play the most?
My husband, Steve.

What is your advice for new players?
Be patient and wait for good hands.

What are your goals in the APC?
To have fun and win every game I can.

Have you ever played in a WSOP or WPT event?
Yes.