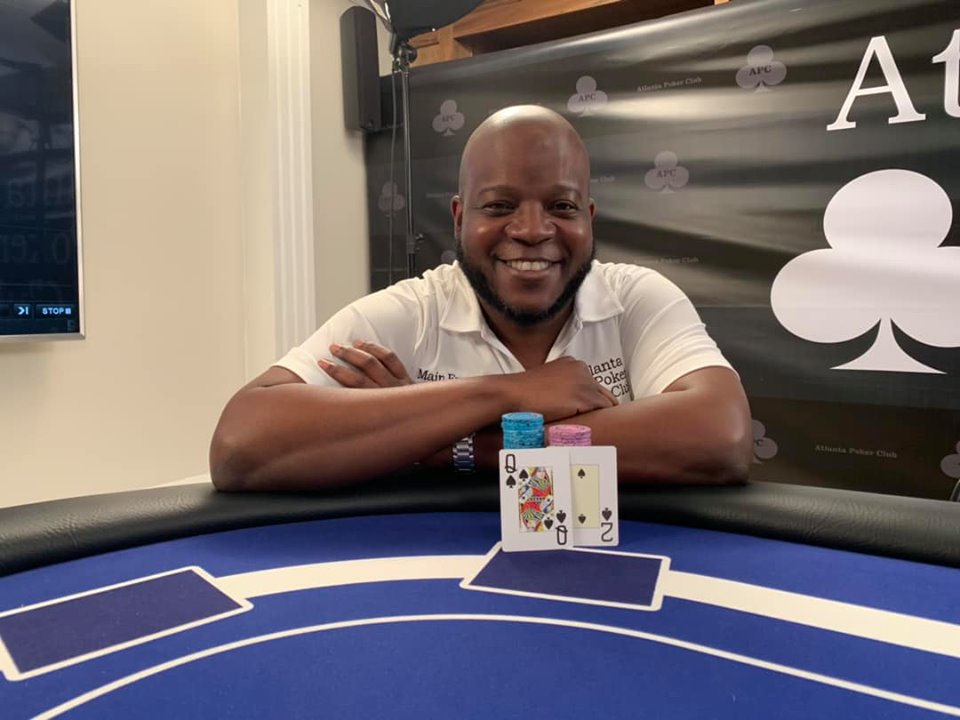 The APC $10,000 Main Event Invitation Only Tournament took place on Saturday, June 1st and Sunday, June 2nd. This event was a 2-Day Tournament, and gave away a $10,000 Seat into the World Series of Poker Event in Las Vegas! It was live-streamed and it was awesome!

To qualify you had to be a 1-year Gold VIP Card Holder, and 189 players came out to play in the Main Event. The Grand Palais Banquet Hall in Lawrenceville was the perfect location to have such a large tournament! For the first time there was a break before the Final Table began!

Louis George has won one ring in the World Series of Poker, and here’s hoping he wins #2! Good luck, Louis!

How did it feel to win the $10,000 Main Event?
The feeling was so surreal and awesome. I still can’t believe it.

What was your impression of the APC $10,000 Main Event?
The main event gets better and better every year! Erin, Jason, Brad, Radar, Nathan and Rachel do an amazing job at putting this all together. It is always very well run.

How did you feel during the tournament at different levels?
I pretty confident in my game but I took a few big hits to my stack early on which left me down to only 6,000. I knew that if I wanted to be a contender I needed to bag at least 80,000 and ended up bagging 93,000; so I felt pretty good going into day two. My next goal was to make the final table with about 500,000 which would put me right in the middle of the pack (my sweet spot). Once we got to the final table, I just settled in and played my game.

What style would describe your game?
I would say my game is a mix of all styles. I really like to mix it up to keep people guessing.

How long have you played Texas Hold'em?
I’ve been playing over 16 years.

How have you changed your game over the years?
My game has changed in so many ways I can’t even describe it. I’m more aware of situations and not afraid to exploit them when possible.

Do you continue to study the game?
Absolutely! Poker is one of those games that’s easy to learn but always have to stay on top of the dynamics of the players and different scenarios.

Have you ever played in a WSOP circuit event other than your first $10,000 WSOP experience?
This will actually be my third time playing in the WSOP $10,000 event. I’ve also played and cashed in many other circuit events and won a ring in event #1 during the 2014 WSOP Circuit Event in New Orleans.

Who are your favorite professional players?
Phil Ivey and Daniel Negreanu

When are you leaving for Vegas and do you know the day you begin play?
I leave for Vegas on July 2nd and plan to play in 1B on July 4th - July 16!